Most traders have some very obvious questions: What is the significance of a time-frame? Why a candle must start and end at a specific time? Why a bar should be constructed by 5 minutes period and not by a 4 or 6 minutes period? Is the bullish candlestick that we see really bullish or if we shift the time 1-2 minutes it will become bearish? What if we have build strategies based on such aspects?

All these are really interesting questions. The obvious parameter that we should consider is time. Time in trading has almost no meaning unless it’s a self-fulfilling prophecy because all the traders are looking at the same chart. OK let’s be more realistic, time has some significance because people are most prone to do things at integral times. Probably not many of us book a date at 10:52, we would prefer 11:00 or 10:30 or 10:45. Human mind can think easily with integral numbers rather than fractions. Also, most of the market news are released at integral times and most of the time specific automated systems are programmed to open or close positions at integral times.

Some Japanese guys had an idea of ignoring the time in a chart by replacing it with specific market movements. The Renko chart was born from the Japanese word “renga” that means “brick” and so it is as you can see at the following image: 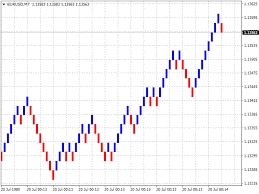 Easily we can observe that all the candles are the same, there are no big or small candles, there are candles with big bodies or big wicks. It really looks like a series of bricks so the name is really successful.

ill be a bullish bar and if it goes to 90 it will be a bearish bar).

This approach has many serious pros:

Renko charts has some cons as well:

In any case, the conclusion is that a trader should at least try the Renko charts because it may be proved a serious help for specific trading styles.