Alan Turing (1912-1954), the famous computer scientist and mathematician, put all the theoretical basis of computers, long before their existence. He also reached the borders of Artificial Intelligence and finally at his paper “Computing Machinery and Intelligence” in 1950, he formulated a very famous question: Can machines think? At the same paper he understood immediately the difficulty to define what thinking is so he rephrased his question. 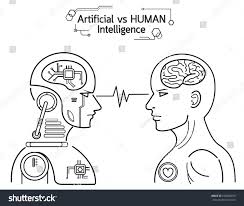 The true meaning of the above questions is “Can a machine simulate the human thinking in such a way that a human cannot distinguish machine from human?” This question is also known as Turing test.

The point is that there’s no easy answer to these questions. We cannot predict the progress of technology and science. There were very serious attempts in the past with the famous Moore’s law that claims that in 1965 that “the number of components in integrated circuit chips will double every 18 months”. Also, Theodore Wright in 1936 states that progress increases with experience and more specifically that “each percent increase in cumulative production in a given industry results in a fixed percentage improvement in production efficiency”. In order to understand how difficult is to imagine the future from the technological point of view, just try to think if a person in 60s would ever imagine the world of social media, digital marketing and smart phones. The progress comes faster in an exponential rate, every day thousands of data scientists, mathematicians and IT experts add something new on the repository of the human knowledge.

What we can do is to cite a very basic comparison between humans and machines with the knowledge of limits of Artificial Intelligence as it is today.

Machines are better than human in:

Humans are better than machines in:

Stay tuned, the battle between machines and humans just started. Will we see scenes from Matrix in the following years or will we see machines that will make our lives easier and better? I guess it is more up to us, how we will create machines and what will be their purpose.